a reliable partner in the global shipping industry. 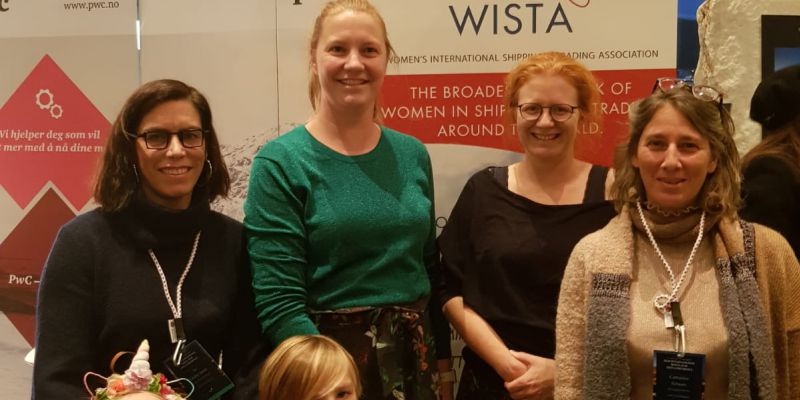 What exactly is WISTA?
Formed in 1974, the Women’s International Shipping & Trading Association (WISTA International) is a global organization connecting more than 3000 female maritime executives. It is the broadest network for women in shipping and trading around the world.
Today 46 countries support a National WISTA Association (NWA), each of which in turn is a member of and is guided by WISTA International. NWA’s provide in-country and regional networking, business and skill building opportunities, corporate visibility, and facilitate relationships within the industry. They promote and facilitate the education of their members and provide liaison with other related institutions and maritime organizations worldwide.
On a global scale, WISTA members have access to an incredibly diverse network of executives in the shipping and trading field on whom they can call for referrals, empowerment, connections, advice, business collaborations and have fun times with. WISTA is about celebrating a diverse world and shaping an industry that is inclusive, diverse, and strong!

Tuesday 23 October: Exco Meeting and Presidents' Dinner
On Tuesday the conference in Norway’s Arctic capital kicked off with The Exco Meeting.
The Executive Committee is responsible for the governance of the affairs of WISTA International and consists of 7 members.
In the evening WISTA International President, Despina Panayiotou Theodosiou invited all NWA presidents or their representatives to The Presidents’ Dinner.
Wednesday 24 October :The Presidents’ Round Table Discussion and The WISTA Annual General Meeting
The next morning they continued the conversations during The Presidents’ Round Table Discussion.
On 5 July 2018 the International Maritime Organization’s (IMO) governing body, the IMOCouncil, approved the Women’s International Shipping and Trading Association (WISTA) International’s application for consultative status.
“Consultative status gives us the opportunity to promote diversity, inclusion and women’s empowerment, which are our main aims,” said WISTA International President Despina Panayiotou Theodosiou. “We can now formally contribute to the discussion for increasing capacity in our industry, a critical component of which is promoting women in the industry, both shoreside and shipboard. WISTA’s efforts support the overarching principles in IMO’s Strategic Plan, especially the promotion of Gender Equality and the empowerment of women.”
Helen Buni & Natalia Laguna from IMO were invited onto stage to discuss the further cooperation between IMO and WISTA.
Other points on the agenda where the introduction of a new website and scholarship between WISTA and the Institute of Chartered Shipbrokers (ICS).

Wista is growing Fast. In 2018 they welcomed: Chili, Portugal, Peru, Uruguay and Venezuela as new NWA’s. Japan and Panama were re-established.

Sanjam Gupta presented the diversity booklet which is the result of a cooperation between the International Seafarers' Welfare and Assistance Network (ISWAN), Anglo-Eastern Ship Management Limited and WISTA International. It is a new booklet on building and maintaining gender diversity on board merchant ships. It addresses critical social, cultural and interpersonal issues that can obstruct productivity of a shipboard team.

Kathy Metcalf, CEO of the Chamber of Shipping of America, was honored as the 2018 WISTA International Personality of the Year. She is professional, dynamic, open-minded, committed and a role model to us all. Kathy is the President and CEO of Chamber of Shipping of America and an active WISTA USA Member. She is also a WISTA International Ambassador who spreads the good word of WISTA wherever she travels. Kathy has been a maritime industry leader for over 40 years. She has personally contributed to valuable change in the marine industry as it relates to diversity and the recognition of how women can positively impact organizations at all levels. Kathy is a no-nonsense person with a great sense of humour when receiving the award she said: "liking what you do is hapiness and hapiness is the key to success."
Next WISTA AGM & conferences will be held in Cayman Islands (2019 oct29-nov2), Germany (Hamburg 2020 sept15-18) and Brazil (2021).

The Conference kicked-off with a warm welcome reception in the laid-back environment of “Rorbua” pub where WISTA enthusiasts from all over the world  tasted Tromsø’s pride, the locally brewed Mack beer from the world’s northernmost brewery.

Thursday 25 October: Wista 2018 Conference and BBQ
The next morning we all gathered in Ishavet Conference Room at the Scandic Ishavshotel.
Speaking of the conference itself, sustainability was high on the agenda.
“We chose Tromsø to highlight the issues facing this region as development, tourism and political engagement in the Arctic continue to grow,” says WISTA Norway president Bjørg Ekornrud. “This is a particularly sensitive part of the world, and each choice we make must be carefully considered. The aim of the conference is to raise the most critical issues and promote dialogues for sustainable business development in the Arctic.”
Under the title “Breaking the ice,” the conference featured inspirational speakers such Elisabeth Grieg, co-owner of the Grieg Group, Martin Stopford from Clarkson Research Services and many others.

In the evening we had a BBQ Dinner at Sommarøy Arctic Hotel where we saw the bright dancing Northern Lights!

In the afternoon it was time for workshops, an inspirational Speech by Pellegrino Riccardi on Cross Cultural Communications, the handover to the 2019 WISTA AGM and conference organizers – the Cayman Islands and then it was PARTY TIME!
At the WISTA gala dinner over 300 women (and some brave men) danced the night away!

Interested in WISTA: Women Who Move The World! Learn more at www.wista.net